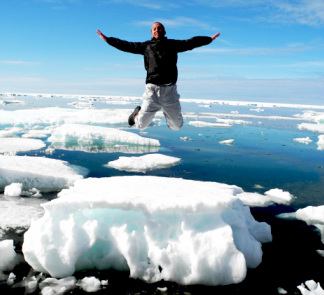 ESROCK VISITS EVERY PROVINCE AND TERRITORY IN CANADA WITHOUT KILLING HIMSELF.

Robin Esrock is pleased as spiked punch to announce his survival after a marathon journey across Canada to research and tick off the nation's ultimate Bucket List.

Despite some close calls with suicidal moose, underwater battleships, violent mosquitoes, and a gruesome cocktail that could strip the innocence off a club of girl scouts, Esrock is confident he'll still be breathing when his first book THE GREAT CANADIAN BUCKET LIST is released in the fall of 2013.  Published by Toronto's Thomas Allen & Son, it will be widely available in concrete and virtual book stores, and given its title, the library at Pearly Gates.     With his book filed and travel complete, Esrock continues to write his popular column for Sympatico.ca, accept wild freelance challenges, and post his images on a dedicated Pinterest channel, because everyone needs yet another social network.