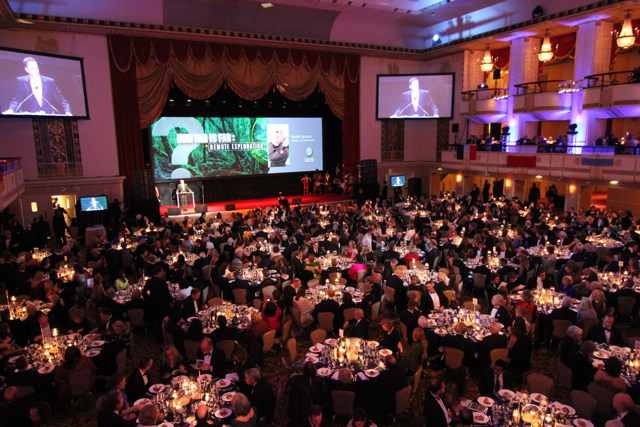 Read, and Watch Robin's Experience with the Explorer's Club Here

Following in the footsteps of personalities like Dan Aykroyd and George Plimpton, the Travel Channel presenter and Globe & Mail columnist had a huge challenge ahead of him:  face a room full of the world’s most successful scientists and adventurers - and face down a stomach-churning buffet.

The Explorer’s Club Dinner is famous for serving exotic delicacies like deep-fried tarantula, worms, eyeballs and alligator claws.  Esrock will be presenting awards to illustrious Explorer’s Club members like  palaeontologist  Philip J Currie and marine conservationist Richard Ellis.  Famous members of the Club include Neil Armstrong, Sylvia Earle and Jane Goodall.  The theme of the night was:
REMOTE EXPLORATION

Esrock’s prestigious MC role came at an exciting time.   He is currently writing his first major book - The Great Canadian Bucket List – to be published in fall 2013 by Thomas Allen & Son.  Esrock is also the creator of a new TV show entitled Get Stuffed, which will be broadcast on OLN in summer 2012.

ABOUT THE EXPLORER’S CLUB
The Explorers Club is an international multidisciplinary professional society dedicated to the advancement of field research and the ideal that it is vital to preserve the instinct to explore. Since its inception in 1904, the Club has served as a meeting point and unifying force for explorers and scientists worldwide.   More info at:  http://www.explorers.org